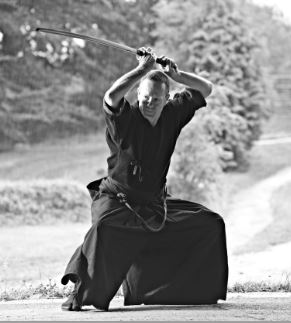 John Evans began practising yoga and tai chi in his teens. At Oxford University he trained in karate and yoga and after graduation went to live at an Anglican monastery where for 5 years he continued studies in Tai chi, Sanskrit and yoga. In 1981 he went to Japan and began studies in Mikkyo (Vajrayana Buddhism) and Kurikara Ryu Heiho near Mount Takao with Fushi Sensei (Murana Masayuki), an independent gyoja or yamabushi. The yamabushi (mountain ascetics) instruct through a systematic and progressive training in the mountains called shugendo, "the path of training and testing".

After 3 years of intensive practice Fushi Sensei introduced him to two of the most senior teachers of sword schools in Japan, Nakamura Taizaburo, founder of Nakamura Ryu Battodo and Danzaki Tomoaki, head of the Kenshukan Dojo where he studied Muso Shinden Ryu Iaido and Shindo Muso Ryu Jodo. He also trained at the Kashima Shinto Ryu school.
In 1987 his training regime of swordsmanship and Shugendo was profiled in an NTV programme in Japan entitled “Igirisujin no Mushashugyo” (An Englishman’s Warrior Discipline). In 1992 he published "Trog", a book of poems about shugendo (ISBN-10: 0-935086-20-X) Following his return to England in 1993 he founded the Fudokan dojo in London. He teaches Nakamura Ryu Battodo and Kurikara Ryu Heiho and received his 7th Dan in 2008 from the International Battodo Federation.
His book "Kurikara – The Sword and the Serpent" was published in 2010 by Blue Snake Books.