The founder and vision holder of the Holy Isle Project is Lama Yeshe Rinpoche, a Tibetan Buddhist meditation master in the Kagyu tradition.

Lama Yeshe is also Abbot of Samye Ling Monastery in Dumfriesshire, where he lives most of the year. Read about Lama Yeshe's interesting life story.

Some - though not all - of the volunteers living on the island are practicing Buddhists, and there is a daily meditation schedule which visitors are welcome to join. It must be stressed however, that Holy Isle is not a Buddhist Centre or a monastery. People wishing to experience life in a Buddhist community and receive Buddhist Teachings should consider visiting Samye Ling Monastery.

From the beginning, the purpose Lama Yeshe had in mind for the island was to create and provide an ecologically sustainable environment where individuals could develop and experience inner peace, regardless of their background or spiritual tradition. Lama Yeshe is very active in the interfaith dialogue both in Scotland and abroad as the representative of Buddhism in the Scottish Inter Faith Council, and he envisions this open dialogue to be an increasingly important aspect of the island.

On the island various traditional Buddhist symbols can be found. Below you will find a little background information to the rock paintings, prayer flags, and stupas, starting with a description of the Retreat at the south end of the island.

A closed Buddhist retreat takes place in the converted lighthouse cottages at the south of the island. Since the first one-year retreat started in 1995, the Inner Light Retreat has been in constant use. The first traditional Buddhist three-year and three-month retreat on the island was completed in March 2006 by twelve women. Since then a few women have undertaken to do individual long retreats, while building works have begun so that the retreat will soon be able to accommodate up to 21 retreatants. On Arran there are a further 21 retreat places for men who started their long retreat in June 2005 in Samye Dechen Shing, a purpose built retreat centre. In the future, the two retreats will run simultaneously, on Arran and on Holy Isle.

Please note that as this is a long-term, closed retreat, no visitors are allowed to enter the clearly signposted gate to the retreat.

Throughout the world at different times people have carved religious images on rocks. Both Scotland and Tibet are no exception to this. In Tibet it is traditional to carve and paint depictions of the Buddha and saints on rocks and cliffs along pilgrimage routes and at holy places, to remind and inspire everyone who passes of the spiritual vision towards which to strive.

A Tibetan monk living in Samye Ling has carved several figures on the rocks along the path to the south end of the island, depicting key historical figures of the Kagyu Lineage and other significant images. They are carved and painted according to the traditional proportions and colours of Tibetan art. You can find teachings on the life stories of some of the figures on the Samye Ling website.

If you walk from the Centre at the north down the path, you will first encounter White and then Green Tara. Tibetan Buddhism recognises many different tantric deities, each of which represents a different qualities of enlightened awareness. Tara is often seen and described as a Mother, because her compassion is so great that every being is as precious to her as a child to its mother. She is also described as Mother of all the Buddhas, because she is seen as the embodiment of perfected Wisdom.

In the form of White Tara, she can help preserve and protect one's precious human life and cultivate wisdom. As Green Tara, she helps to overcome fear and to remove both external and internal obstacles on the path. She is quick and fearless in her activity - her outstretched right leg shows her readiness to spring into action whenever she is needed.

Milarepa (1052 - 1135) was a wandering yogi with quite an unusual life story: he killed many people in his youth, but through the power of his remorse and full-hearted practicing of the Buddhist teachings, purified his misdeeds and became the most well-known Tibetan Buddhist equivalent of "saint".

Milarepa's teacher is depicted on the next rock painting: Marpa 'the Translator' (1012 - 1097). A wealthy farmer, Marpa made three long and dangerous journeys from his homeland Tibet to India, to study with different teachers so he could bring the precious Buddhist teachings back to Tibet.

Gampopa (1079 - 1153) was Milarepa's main student, but led a very different life from his teacher: originally a happy family man and renowned doctor, he became a monk after his family died of disease. After many years of practicing Gampopa founded a monastery which grew to legendary proportions, and thereby introduced the monastic tradition to the Kagyu Lineage.

High up on the rock face you will find a depiction of Buddha Shakyamuni (560 BC - 480 BC), the founder of Buddhism as we know it. Originally a prince, he gave up his royal status when he encountered old age, sickness and death, to find the way to end all suffering. Today there are many different forms of Buddhism, such as Theravada, Zen, and Tibetan Buddhism. What they all have in common is that they are "a way of living based upon a quest for inner peace and world peace, respect for others, dedication to the happiness not only of humankind but also of the animal kingdom and any form of sentient life, generosity, self-control and a deep love of knowledge. [...] It does not believe in God as a creator but does believe in a powerful, pure and compassionate essence common to each and every being and known as buddha nature". (Ken Holmes, 1995)

The next rock painting on the path depicts Dusum Khyenpa, the first Karmapa (1110 - 1193). The most gifted student of Gampopa, the Karmapa made predictions about his future incarnations, who were to become known by the title "Karmapa". Through the centuries, the Karmapa has been the head of the Karma Kagyu Lineage. The present Karmapa is the 17th in his line. His name is Ogyen Trinley Dorje and he turned 21 in 2006. He currently lives in India.

Tibetan symbols have been carved into the rocks near the retreat gates and along the path to the south. Like the rock paintings of Buddhas, this has an ancient history in Tibet, where there are walls or large piles made of stones that have mantras (prayers) carved on them. The mantra OM MANI PEME HUNG is the most widely used of all Buddhist mantras, wishing peace and well-being to all sentient beings. 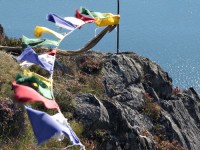 The multi-coloured flags in different places on the island are Tibetan prayer flags. The Tibetan word for them is dar cho: "dar" means to increase life, fortune, health and wealth; "cho" means all sentient beings. They are raised with the aspiration to bring happiness and peaceful energy, and the wind carries the prayers and blessings all over the world.

This flag was seen by the 16th Karmapa in a dream. He named it 'Namkyen Gyaldar', which means the 'Victorious Flag of Buddha's Wisdom'. On one level, the blue represents the sky (heaven), symbolizing spiritual insight and vision, and the yellow represents the earth, the actual world of our everyday experience. The symmetry of the wave pattern symbolises the Buddha's teachings which flourish between the two. On another level, the blue symbolizes wisdom, while the yellow stands for compassion. The wavy line and the joining of the yellow and blue colours represent their inseparability. 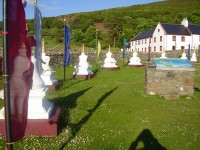 Eight small, white ornamental structures can be seen just after coming off the jetty. In Tibet, stupas can often be found at sites of special religious meaning, and are a focus for pilgrimage and prayer. A stupa is a symbol of the enlightened mind of the Buddha. Its function is to restore, balance and transform negative energies to heal both our planet and ourselves. The benefits of a stupa are said to be impossible to measure, for anyone, human or animal, who comes in contact with it, and even more when you mindfully walk around it three times clockwise.