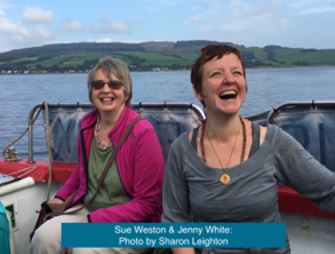 Sue Weston has been practicing and teaching mindfulness, T’ai-Chi and Qigong for many years and has a PG Diploma in Mindfulness Studies from Aberdeen University and Samyé College.  Formerly a dancer, choreographer and movement teacher she has worked nationally and internationally in film, TV and theatre. Sue was awarded an honorary doctorate in 2006 for her work over several years in Sri Lanka supporting humanitarian causes. In 1999/2000 she spent a year in retreat on Holy Isle to deepen her meditation practice. Sue is the initiator of Relaxing The Mind activities providing T’ai-Chi, Qigong and mindfulness courses, classes, workshops, trainings and retreats in schools and centres in South East Wales, and on Holy Isle, Scotland.

Jenny White completed a three year training at Glasgow School of Shiatsu in 2011 and moved to Edinburgh in 2013. Whilst studying, Jenny was living and working at The World Centre for Peace & Health on Holy Isle. Jenny offered treatments to guests who came to the island seeking retreat, relaxation and exploration or themselves and their body/mind. She is a teaching assistant with The Shiatsu School Edinburgh and has also trained with Rob Nairn and the Mindfulness Association and holds a Post Grad Certificate in Emotional Education. She has been offering shiatsu for the participants of the Qigong & Meditation Retreat Week since 2014. She can be contacted at http://www.edinburghshiatsu.com/jenny-white.html